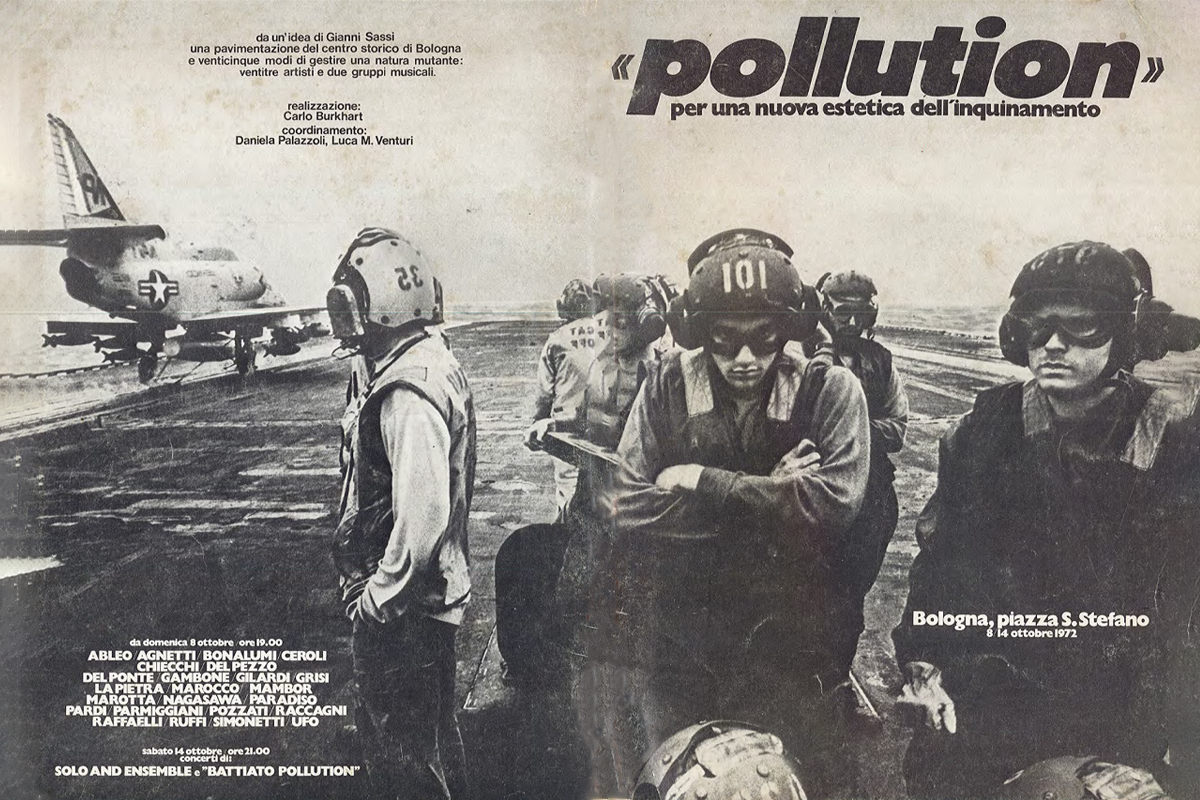 Fifty years ago this October, the first public initiative of Iris Ceramica (the Historical Brand of Iris Ceramica Group) aiming to raise awareness on environmental issues was held in Bologna: the exhibition “Pollution – for a new aesthetics of pollution”. This major anniversary bears witness to the company’s vocation of sustainability, a declaration of intent that came from the Iris Ceramica Brand, and which has been implemented continuously and consistently for years, as the manifesto “Shaping the Future” still demonstrates today.

In 1972, Piazza Santo Stefano was paved with ten thousand 33×33 cm ceramics – produced, numbered and signed by Iris Ceramica – reproducing a lump of earth, the fertile humus of Pollution, the revolutionary project for a new aesthetics of pollution curated by Gianni Sassi; the square became the stage for the installations and performances of twenty-four artists and two musicians – including Franco Battiato – committed to the topic. 50 years have passed since those revolutionary weeks, and Iris Ceramica Group is celebrating this major anniversary as an ambassador, now as then, of the equation “Economy = Ecology”, coined at the time by Romano Minozzi, the Group’s Chairman and Founder.

And it is doing so with Shaping the Future, the message of sustainability that echoes the ecological challenge launched so pioneeringly by Pollution ‘72. Half a century later, the Group continues its business project through beauty, sustainability and technological innovation, to build a future shaped around its own values, improving interaction between humans and the environment. A future whose roots lie in the respect for the environment and for the people who live in it, in line with new social, ecological and urban needs. The concept, shown to the public for the first time at Cersaie 2022, is an authentic manifesto of the Group, highlighting even more clearly how the issues of technological innovation and the sustainable future the company intends to build have been written in its DNA for over 60 years.

Pollution was the first public action, the first, resounding act that was a testimonial to a real, concrete value, a company philosophy that distanced itself from restless industrial production, striving instead for a better quality of life. Many other significant actions have followed since then: Iris Ceramica Group was the first to invest in research, recycling, green production, and has never stopped doing so, working with sustainable growth professionals and investing in research into the effects of production to meet today’s aim of zero impact. Bearing witness to this are the goals achieved with Active Surfaces® and the Zero Emissions Project, the Cradle to Cradle Certification and the world’s first ceramics factory powered by green hydrogen, which will be completed by the end of 2022 – H2 Factory. The Group’s commitments are also expressed through the activities supporting the Sustainable Development Goals (SDGs) of the UN Agenda 2030 integrated into the ESG strategy as fundamental, concrete and measurable references.

Already at the 2018 edition of the Cersaie trade fair, the Group remembered the Pollution 72 project, with the presentation, in Piazza Santo Stefano in Bologna, of POLLUTION 2018 – RefleAction. A temporary installation – born from the partnership with the firm MC Architects and SOS School of Sustainability – of 40 oak trees emerging from artificial soil made with the large, anti-pollution Active Surfaces®, which are covered by many ISO certifications. Because the “j’accuse” underlined by Pollution has continued to raise questions, with increasing awareness, leading to investments in economic programs to fight an ecological battle that offers opportunities for improvement.

“My father Romano Minozzi, who has always been a trailblazer, used the 1972 Pollution project to spread a message in favour of the environment at the height of the economic boom,” comments Federica Minozzi, CEO of Iris Ceramica Group. “50 years later, that message is more urgent than ever, and must foster thoughts and investments in a more sustainable tomorrow. He sought to create a more aware outlook, that which has always driven our company, making us capable of turning critical issues into opportunities.”